The Best Hidden Gems on Steam

As a Steam user, you know full well that Valve’s online gaming platform has an extraordinary catalog. It contains all kinds of video games, from the latest releases to timeless classics that you can rediscover on your PC. But when you browse the Steam website or check out the deals of the week, you probably end up always seeing the same games. Truth be told, it’s hard to find games on Steam unless you’ve heard of them before or they appear among the recommendations on your home page. 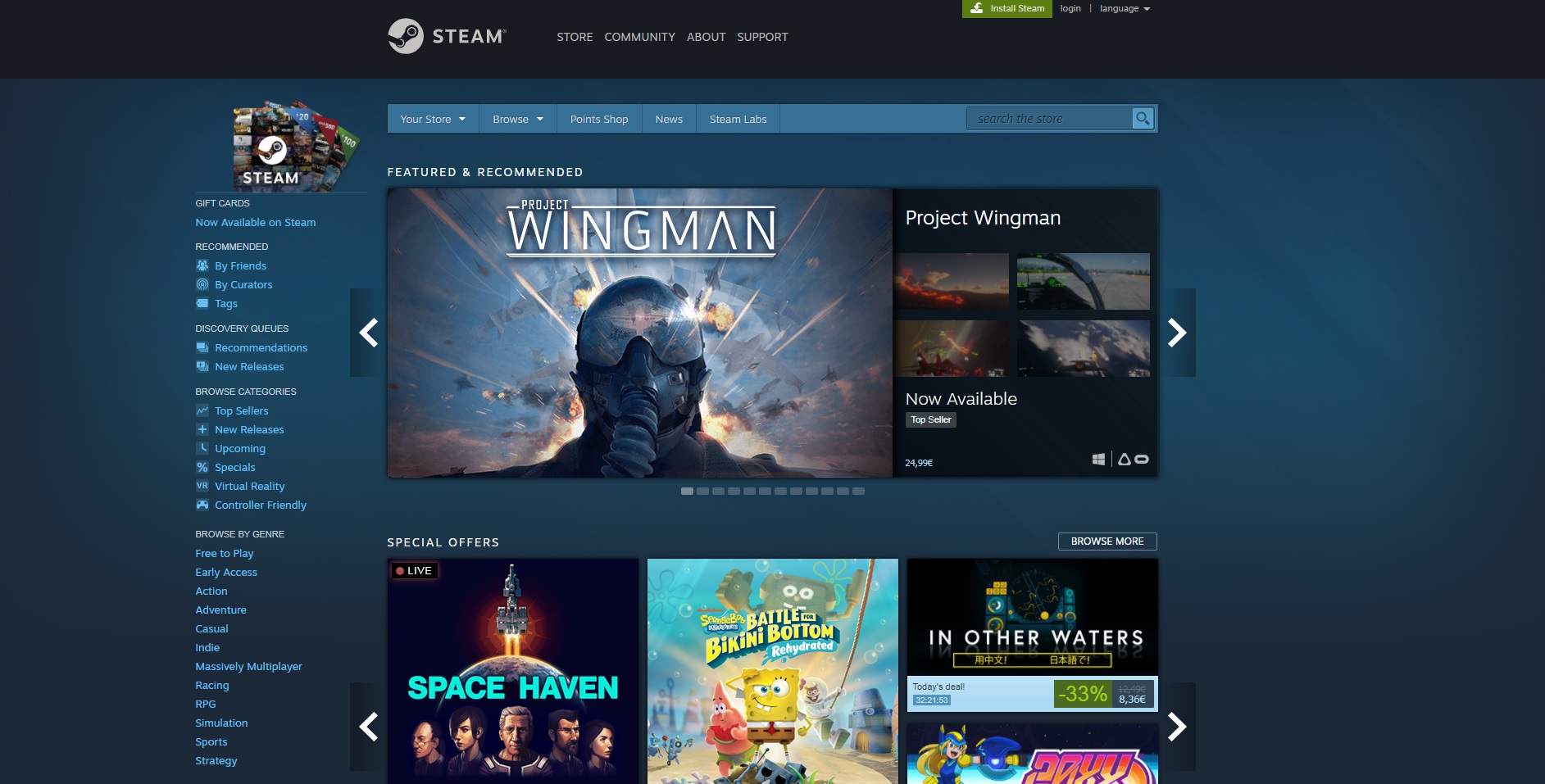 If you’re an expert gamer who loves discovering new games you’ve never heard of, you’re going to like this article. Today we’re going to leave aside the most popular and commercial Steam games to focus on its hidden gems. Because believe it or not, there are some excellent titles hidden in its catalog that, despite being great games, have largely gone unnoticed. Want to know which ones?

The Count Lucanor is a real gem created by the Spanish studio Baroque Decay. Inspired by classics such as The Legend of Zelda, Silent Hill and even the mythical Dark Souls, The Count Lucanor transports you to a fantasy world shrouded in mystery, with a creepy plot that won’t leave you feeling indifferent.

In The Count Lucanor, you play Hans, an ungrateful boy who, tired of being poor, decides to abandon his mother to go in search of riches. After spending the night in a dark forest, Hans meets an enigmatic goblin who leads him to Tenebrae Castle. There, he promises Hans that he will inherit the entire fortune of Count Lucanor if he can guess his name. But the castle hides many more secrets than then goblin’s name, and the Count’s suspicious servants will not hesitate to pursue the young man and attempt to kill him … especially the terrifying Red Camarlengo.

The Count Lucanor is a game with stunning graphics that makes the most of pixelated aesthetics and gorgeous 2D cinematics. It also has a curated soundtrack and gameplay consisting of exploration, puzzle solving, stealth and many decisions that will completely change the course of your adventure. You’ll never get bored with this diamond in the rough, so don’t miss it! It’s really worth your while.

Hidden Folks is a beautiful indie game that’s the result of a collaboration between game designer Adriaan de Jongh and cartoonist Sylvain Tegroeg. It’s a mix of the classic Where’s Wally? and popular video games to find hidden objects. What makes it so magical? Very simple: you have to locate characters in fully animated, interactive and totally hand-drawn scenes.

Hidden Folks is the perfect game to play when you need a moment to relax and get away from the problems of everyday life. Each level is a real challenge, because finding hidden people and objects in these highly populated scenarios is not at all easy.

One of the strengths of Hidden Folks is that its scenarios are extremely interactive. For this reason, you might find yourself spending more time seeing what happens if you open a door or bother that crocodile than looking for your targets.

Charming, fun and relaxing, Hidden Folks is a game that will thrill both casual players and the most expert gamers. Although it seems like a simple title at first glance, once you start playing, it’s impossible to stop.

Into the Breach is an extraordinary turn-based strategy game created by Subset Games, the studio behind FTL: Faster than Light. And with that kind of title as a precedent, it was easy to predict that Into the Breach would become one of the greats of the genre.

Into the Breach takes us to a future where the human race is threatened by gigantic creatures called Vek that have emerged from beneath the earth. Colossal futuristic mechs are used to fight the Vek and can be customized in detail, but to win your battles, you’ll need something far more powerful: a good strategy.

Every game of Into the Breach is an intense and completely new experience, as the battlefield is generated randomly. Sporting colorful pixelated graphics, this is one of the best turn-based strategy games in the market today.

Lair of the Clockwork God

Do you like adventure games? What about platforms? If the answer is yes, you’ll love Lair of the Clockwork God! This unclassifiable indie game combines the best of both game styles, standing out as a unique title in the Steam catalog.

In Lair of the Clockwork God, you’ll play the roles of Ben and Dan. While Ben is a fan of point-and-click adventures, Dan is a platform game enthusiast. Both must put their differences aside to survive in a frenetic adventure as they race to stop the various apocalypses that have been unleashed simultaneously all over the planet.

As you can imagine, the gameplay of Lair of the Clockwork God is a superb mix of both genres. As Ben, you can interact with the environment, pick up objects and use them as if it were a graphic adventure. However, if you play Dan, the game becomes a wild platform in the purest Sonic style. To advance in the game, you’ll have to know when and how to use both. Fun is guaranteed!

With eye-catching, colorful 2D graphics and an entertaining story, Lair of the Clockwork God is a game that will hook you from the first minute. If you haven’t played it yet, we highly recommend that you download it today.

One Shot, an amazing game created with the RPG Maker engine, is inarguably reminiscent of the legendary Undertale. It introduces us to Niko, a cat boy who must restore balance to a world without a sun and return to his home world.

One Shot might seem like a “normal” game at first, but as you progress through it, you’ll discover that Niko’s adventures are far more than what they seem. In fact, One Shot breaks the fourth wall, and on more than one occasion, you’ll question whether what you are playing is real or just a game. The game achieves this by connecting to your PC and analyzing its contents. For example, you may have to solve puzzles by searching in the files of your own computer or use a password from your PC to locate something.

While it’s not a very long game, One Shot is a surprising, endearing title whose characters will touch your heart. If you’re a fan of games like Undertale or Cave Story, you’ll definitely love it.

Yuppie Psycho: Executive Edition is the second game created by Baroque Decay, the minds behind The Count Lucanor. It may have a strange name, but it’s one of the most entertaining, bizarre and vibrant games to hit the market in recent years. We promise that you have never played something like this before. Described as a “survival horror game about your first day on the job,” in Yuppie Psycho: Executive Edition, you’ll laugh and tremble with fear as you follow a plot worthy of the best David Lynch film.

In the game, you’ll play Brian Pasternack, an ordinary young man without a great education or expectations in life who one day receives a job offer from the Sintra Group. It’s the biggest company on the planet and only the best and brightest are hired there. Surprised by his luck, Pasternack goes to sign his contract but is stunned to discover what awaits him there. His role at the Sintra Group will be to find and murder a witch who has turned the company into a gruesome hell where death may be waiting for you next to the coffee machine.

Like The Count Lucanor, Yuppie Psycho: Executive Edition features beautiful pixelated graphics and stunning 2D cinematics. The game mixes the gameplay of survival horror with elements of exploration, puzzles and workday simulation… Yes, you read that correctly. Yuppie Psycho is no ordinary game, so get ready to go to the cafeteria to talk to your work colleagues after escaping from the underworld monsters that roam the company.

Fun, quirky and above all unique, Yuppie Psycho: Executive Edition is a game full of memorable scenes that you won’t soon forget. In addition, every decision you make alters the game’s ending, so replayability is guaranteed. Don’t miss it!

We hope you liked our roundup of the best hidden gems on Steam. Do you know of any titles that are missing from our list? Tell us about them in the comments section!

How to Get Rid of Everything Google Knows About You